As we mark Earth Day 2021, Bere Island, as a community has been shaped by the natural landscape of the island, the productivity of the land and the sea that surrounds it.   The island’s cultural heritage has been largely influenced by its maritime nature and it’s strategic defence position at the entrance to Bantry Bay, providing safe haven for both British and US battleships during World War One.

In 2003, with support from The Heritage Council, Bere Island Projects Group launched the Bere Island Conservation Plan in a bid to sustain the island population through the creation of employment and recreational facilities, to protect it’s built and archaeological heritage and preserve the island’s natural landscape and marine ecosystems for future generations.

Our funding support from the Heritage Council in 2021 will allow Bere Island Projects Group to continue our work in implementing  initiatives under the Bere Island Conservation Plan.  Actions for 2021 include monitoring the impact of climate change on the  island’s coastal heritage sites,  working to protect our night skies and promote Dark Sky tourism and investigating further ways to use renewable energy on Bere Island.

We wish you all a Happy Earth Day! 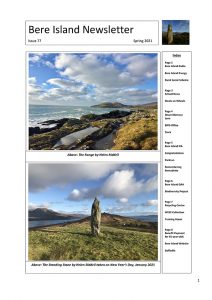